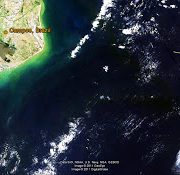 Today’s MERIS satellite image (courtesy of the European Space Agency) shows an apparent slick that’s now about 56 miles long off the coast of Brazil in the Campos Basin:

As in the MODIS images shot two days ago, this slick appears to be continuously emanating from a point source at the north end. Today Chevron claimed it was being caused by a natural oil seep, not any leak or problem associated with the offshore field that they operate.

It is possible, but call us skeptical.  From my previous years working as an exploration geologist I know there are natural seeps off Brazil (that was a study I did for BP back in the day…). But I’ve never seen a natural seep create a slick this large on a satellite image.

One way to verify if it’s a natural seep: go back and look at historical satellite images for this area, and if it doesn’t show up then either it’s a brand-new natural seep or it’s a human-caused slick.  We’re doing that right now.  We’ll let you know what we find.

The News is Hopeful off the New Zealand Coast
Scroll to top
SkyTruth and/or its third party tools use cookies to monitor traffic in the aggregate on our websites and applications and to improve user experience. If you continue browsing, we'll assume you agree to the use of cookies. You can change your cookie settings at any time in your browser settings. Find out more in our privacy policy.