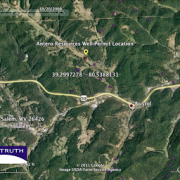 Yesterday we received this report from our SkyTruth Alerts System about a spill of “fracking fluid” from a pit located about a mile and a half to the north east of Salem, WV in Harrison county.  Note that we placed the original report in the town of Salem because we had to approximate the location since no specific latitude and longitude were given in the report.  The actual location according to gas drilling permit data from the West Virginia DEP appears to be about a mile up Cherry Camp Run heading north from Rt. 50:

Here’s what we know:

The operator of the site is Antero Resources Bluestone, LLC which sits on property reportedly owned by Mary Post and Robert Haught. Several drilling permits on this property were issued over the past few years, and several permits were issued and then canceled. The most recent permit we see in the WV Permit Data site is API number 033-05540 which was approved on 4/19/2011. The prior permits for this farm were signed by Hall Drilling. So far, we haven’t found any actual ‘permit commenced’ filing for any permit issued on this property (we believe that a “permit commenced” filing indicates the start of drilling activity). In the most recent permit, the current operator is listed as Antero Resources Bluestone LLC.   A little online research reveals that Bluestone LLC was acquired by Antero Resources last December. According to that press release: “Sam Ross, Mike Hall and the Bluestone team have created quite a valuable asset in the play and we congratulate them on their success.” In the WV Permit Data search, we found that Michael Hall was the contact person for Hall Drilling, LLC. So we conclude that Hall became Bluestone LLC, and was then taken over by Antero Resources.

We did a little more digging and found this Youtube video which was uploaded on March 6, 2011 and appears to show the same site:

Then we found another Youtube clip, uploaded just two months later on May 21, 2011 showing what appears to be the same drilling site and including the API number of the most recent permit for that site, which is probably posted on a sign near the road:

We’ll let the videos speak for themselves, and only point out that the surface of the water is awfully close to the top of the berm and there is not much clearance there to prevent the contents of the pond from overflowing into the creek.  We have no idea what’s in the pond though, and no way to verify that these videos do indeed show the same location as the NRC report.

Oil Spill (Natural Seep??) off Brazil – 56 Miles Long Today
Scroll to top
SkyTruth and/or its third party tools use cookies to monitor traffic in the aggregate on our websites and applications and to improve user experience. If you continue browsing, we'll assume you agree to the use of cookies. You can change your cookie settings at any time in your browser settings. Find out more in our privacy policy.