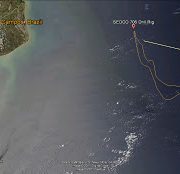 We’ve been tracking the oil spill reported off Brazil a few days ago, in the Frade field operated by Chevron in the Campos Basin, Brazil’s most productive area of offshore production, and a place where many deepwater technology milestones have been made for offshore oil production.  Chevron claimed the oil slick was being caused by a natural oil seep on the seafloor, but they suspended drilling on a well in the field.  Brazilian authorities quickly disputed that a natural seep was the cause.  And yesterday Chevron admitted the possibility that something went wrong at their drillsite.  According to today’s news release from Brazilian authorities, Chevron is trying to kill the well – indicating a loss of well control and blowout. 18 response vessels are on the scene, and Chevron reports the well is leaking about 8,400 – 13,860 gallons  (200 -330 barrels) per day.

Based on Brazilian government data showing the locations of active drill rigs, provided to us by some of our very helpful followers on Twitter, we conclude that Chevron’s well was being drilled by the SEDCO 706 semisubmersible drill rig operated by – wait for it – Transocean.  Yes, the same company that operated the doomed Deepwater Horizon rig for BP.

The MODIS/Aqua satellite image from NASA, above, was taken three days ago.  It shows an apparent oil slick originating from the drilling location and extending over 2,379 square kilometers (the south end of the slick gets entrained in an interesting clockwise eddy in the ocean currents).  At 1 micron thickness, that’s a volume of 628,000 gallons (14,954 barrels) of oil.

Assuming the spill began midday on November 8 (24 hours before we first observe it on satellite imagery), we estimate a spill rate of at least 157,000 gallons (3,738 barrels) per day.  That’s more than 10 times larger than Chevron’s estimate of 330 barrels per day.

The News is Hopeful off the New Zealand Coast

Brazil Oil Spill Update
Scroll to top
SkyTruth and/or its third party tools use cookies to monitor traffic in the aggregate on our websites and applications and to improve user experience. If you continue browsing, we'll assume you agree to the use of cookies. You can change your cookie settings at any time in your browser settings. Find out more in our privacy policy.