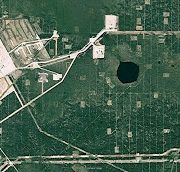 As controversy over the proposed Keystone XL Pipeline builds, Alberta’s vast oil sand reserves have become the target of much speculation and review. Last week SkyTruth published maps and images revealing the extent of surface mining operations and their visible impact on Alberta’s environment (see “Oil from Sand? You Better Believe It” and  “Tar Sands Mining…” blogs).

The surface mining extent is startling enough in scope, but surface mining is just the proverbial tip of the iceberg: the vast majority of oil sands wealth – 80% to be exact – lies farther below the surface. These deeper reserves will most likely be extracted through in-situ or “on site” methods, like Steam Assisted Gravity Drainage (SAGD), where steam is injected into the ground to liquefy the bitumen for easier retrieval.

(maps and images after the jump)

Although not as much of an eyesore as open-pit surface mining operations which draw the majority of attention, in-situ methods are no less invasive or environmentally risky.

This “Area Leased for In Situ Extraction” map is built from data graciously provided from the Pembina Institute. The extent was based upon lands already leased for in-situ extraction as of August 2006. This extent has not been updated to account for new leases since this time. Based upon Alberta’s regional reports of drilling activity, it can be assumed that the actual, current extent is bigger than illustrated here.

So what does in-situ development look like? Google Earth has detailed imagery showing some of the active in-situ operations; they look a lot like natural-gas drilling, with drilling sites spaced very closely together, processing facilities, and a network of access roads, pipelines and utility corridors.  In many places, as in the example below, there is also a dense grid of seismic survey lines.  All in all, this is a highly fragmented landscape – and there’s a lot more going on beneath the ground that we can’t see:

Check out more pics like this in our growing gallery of Alberta tar sands images and maps.

Unreported Leak / Discharge from Oil Platform Off Louisiana Coast – May...
Scroll to top
SkyTruth and/or its third party tools use cookies to monitor traffic in the aggregate on our websites and applications and to improve user experience. If you continue browsing, we'll assume you agree to the use of cookies. You can change your cookie settings at any time in your browser settings. Find out more in our privacy policy.