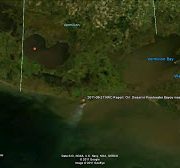 A small plume of smoke appears on yesterday morning’s MODIS/Terra satellite image of the Gulf coast, not far from Vermilion Bay in Louisiana. It’s not a big plume, only about 16 miles long, and normally we wouldn’t note this except that a tiny diesel-oil spill (2 ounces!) was reported from a vessel at this same location back on September 27.

The Terra image was taken at about 10:45 am local time.  The MODIS/Aqua image taken a few hours later at about 2pm shows the plume is much fainter but stretches about 80 miles out into the Gulf.  The fire seems to be cooler – the smoke plume isn’t as dense, and doesn’t throw an obvious shadow like it does on the Terra image.  We don’t know if this fire and the earlier report of a diesel leak from a vessel are related, but the spatial coincidence was too interesting to pass up.

Beautiful MODIS/Terra Image of Gulf Today
Scroll to top
SkyTruth and/or its third party tools use cookies to monitor traffic in the aggregate on our websites and applications and to improve user experience. If you continue browsing, we'll assume you agree to the use of cookies. You can change your cookie settings at any time in your browser settings. Find out more in our privacy policy.