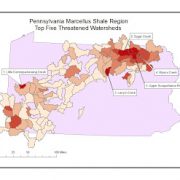 As part of SkyTruth’s Marcellus drilling monitoring program, we are publishing a new tool called the Fracking Hotspot Map.

The current Pennsylvania Fracking HotSpot Map, which highlights the top five most threatened watersheds in the next six months (October 2011 – March 2012) was derived from data provided by the Pennsylvania Department of Environmental Protection’s Office of Oil and Gas Management.

The PADEP disseminates all permit and well records for drilling events in the state, which SkyTruth consults regularly to keep findings as up to date as possible. In order to create the HotSpot analysis, permits for only new (not renewed) Marcellus wells approved between April 1 – September 30, 2011 were downloaded and joined with records of actual wells drilled between that time. Any permits with wells already drilled were removed, thus leaving all permits yet to be drilled as of September 30, 2011. Analyzing past year’s permit and well reports revealed that, as a whole, the majority of permits are drilled within six months of issue.

SkyTruth used this model as a basis to locate the most heavily permitted, and thus the most future drilled, watersheds in the PA Marcellus shale region.

The impact of this type of analysis is obvious. Concerned homeowners, industry players and policy makers can pinpoint which counties, townships and watersheds will be most greatly affected by future drilling. Further data inclusions can highlight impacts to state land, protected forest, and fish and wildlife concentrations.

It is SkyTruth’s hope that with such accurate geographical knowledge, Pennsylvanians can take steps to foresee and mitigate future possible environmental harm caused by increased hydraulic fracturing.
Townships located in high permit dense watersheds, such as Little Connoquenessing Creek or Sugar Creek, can take extra precautions such as pre-drill and post-drill well water testing.