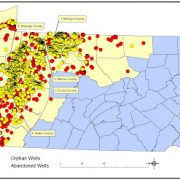 As part of SkyTruth’s ongoing work to illustrate drilling through images, mapping and raw data analysis, analysts have produced a new map illustrating the startling number of improperly abandoned oil and gas wells in Pennsylvania.

Drilling in the state goes as far back at 1859 but it was not until the 1920s that legislation required all new wells to be plugged at production’s end, and not until the 1960s that all wells had to be permitted. As a result, thousands of oil and gas wells with no recorded location information litter the state, many that were never properly sealed (plugged) or are in varying states of deterioration; 2,184 abandoned and/or orphan wells in McKean County alone.

This issue has become of greater concern due to increased drilling throughout the state, especially in the Marcellus Shale region. As more and more companies scramble to gain footholds in Pennsylvania, West Virginia and even New York, it is crucial that industry players and local citizens alike recall what past drilling booms have left behind. The effects of a well, even after it has stopped producing, can have serious environmental and health consequences for decades to come if proper regulations are not mandated and followed.