NASA Earth Observatory image modified by SkyTruth
Blog - Latest News
You are here: Home1 / Biodiversity2 / Over 28,000 Abandoned Wells in the Gulf of Mexico 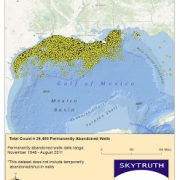 How’s this for a number? According to data released by the Bureau of Ocean Energy Management and Enforcement, there are currently 24,486 known permanently abandoned wells in the Gulf of Mexico, and 3,593 “temporarily” abandoned wells, as of October 2011.

These wells range in dates of abandonment from as early as 1948 to August of this year. This includes some “temporarily” abandoned wells from the 1950’s! That is a pretty loose definition of “temporary” in this analyst’s opinion.
In industry terms, the “temporary” label is given to those wells which companies found more profitable to close off for a short time to begin re-drilling at a later date. Thus, “fewer plugs are installed and the seals are not as secure.”
It is important to remember that even in the case of permanently abandoned wells, degradation of plugs and casings is not uncommon, as many were sealed before strict regulations were implemented or before the sealing technology used today was available.

The obvious question: Are these abandoned wells still capable of leaking oil into the ocean?
Answer: Absolutely.

According to a recent AP report, “in deeper federal waters…there is very little investigation into the state of abandoned wells.” Um, really? Lest anyone forget it was in these “deeper waters” that the Deepwater Horizon disaster occurred (a well actually being “temporarily” plugged at the time of the blowout), taking over three months to effectively seal and depositing an estimated 5 million barrels of oil into the ocean. Since those pesky deep waters are so difficult to work in I suppose it makes sense to have minimal inspections there…

However, good news may be on the horizon for this “Ocean of Holes.”  President Obama announced last year that all temporarily abandoned wells must be plugged and all non-producing platforms be removed.

According to BOEMRE’s data, which is displayed in this analysis, these 3,500 well records are still on the books for as late as August 2011. Guess the jury is still out as to when all those “temporarily” abandoned wells will be properly plugged.

Furthermore, this policy means that if these wells are sealed and no longer classified as “temporary” then another 3,500 wells will become “permanently” abandoned, thereby adding to the number of wells which have traditionally been minimally inspected and maintained.

The Deepwater Horizon disaster called an unprecedented amount of attention to this long-neglected issue and it is crucial that this problem remain one of concern to the public and Congress.