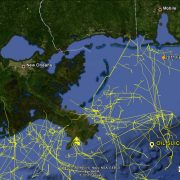 Yesterday BP shut down a major natural-gas pipeline in the central Gulf of Mexico because it’s producing too much liquid.  Today they announced the shutdown will be extended because of a potential tropical storm brewing in the Gulf. The Destin pipeline (here’s a nice map) is a major piece of offshore oil and gas infrastructure, collecting natural gas from platforms in the Mobile, Viosca Knoll, Main Pass and – wait for it – Mississippi Canyon areas.  The cause of the fluid buildup, and the type of fluids involved, was not reported.  It’s not uncommon for natural gas wells to also produce liquid gas condensate, an assortment of hydrocarbon liquids, in various quantities.

Now allow us to indulge in some wild speculation:  IF there is seawater in the pipeline (and we don’t know that), it could mean that some part of the offshore Destin pipeline network has been damaged.  It may just be coincidence that one of the feeder lines on the Destin map, labeled R-13, is the closest pipeline to the oil slicks observed in the Gulf during an overflight two days ago, reported in our blog yesterday.  This is the yellow line on our map located about 5.7 miles northeast of the location where slicks were observed.  And there was a shallow, magnitude 3.5 earthquake very close to the Destin pipeline, just off the mouth of Mobile Bay, back in February.  Maybe the line got a little shook up by that small quake.  Is it possible that the slicks documented in this area on August 30 are in some way related to the shutdown of this pipeline?

Radar Satellite Image Shows Oil Slicks Seen August 30
Scroll to top
SkyTruth and/or its third party tools use cookies to monitor traffic in the aggregate on our websites and applications and to improve user experience. If you continue browsing, we'll assume you agree to the use of cookies. You can change your cookie settings at any time in your browser settings. Find out more in our privacy policy.