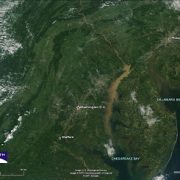 The one-two rainfall punch thrown by Hurricane Irene and Tropical Storm Lee landed hard on the chin of the mid-Atlantic and New England, bringing record amounts of rainfall and causing epic flooding from Washington, DC to Vermont.  Now we’re seeing one of the results: a torrent of river water laden with runoff is pouring into bays and estuaries along the Atlantic coast.  Yesterday afternoon’s MODIS/Terra satellite image shows this impact on Delaware Bay and the upper reaches of the Chesapeake Bay:

Radar Satellite Images of BP / Deepwater Horizon Spill Area, September 11 and...
Scroll to top
SkyTruth and/or its third party tools use cookies to monitor traffic in the aggregate on our websites and applications and to improve user experience. If you continue browsing, we'll assume you agree to the use of cookies. You can change your cookie settings at any time in your browser settings. Find out more in our privacy policy.