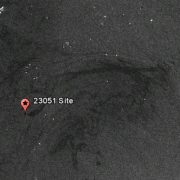 Before this month, the last time the NRC received any report coming from Taylor Energy’s chronically leaking platform 23051 was July 21. Well, after a long absence, we started seeing NRC reports again starting on September 1 and since then, someone’s been reporting on that leak on an almost daily basis. And, as before, it seems as though the reporting is consistently inconsistent.

We’ve been tracking this platform since we discovered it to be leaking during the aftermath of last year’s BP Deepwater Horizon explosion, and we’ve compiled everything we have on this chronology. And we’re updating it daily. And things still don’t seem to add up right.

For example, let’s look at September 18, when the NRC received a report that 1 gallon of crude oil was spilled, resulting in a slick that was .19 miles by 2.1 miles. If that slick was continuous, and it was completely covered in oil, on average 1 micron thick, our analysis shows that, in reality, there were 272.13 gallons of oil spilled.

How about on September 14, when the NRC report showed that there was a spill of 43 gallons with a slick that was .25 miles by 13.6 miles. Using the calculations above, our analysis shows that the true amount of oil spilled for that incident would be 2291 gallons. Seeing a pattern of inconsistent reporting? Take a look at this satellite image of 23051 from that same day.

Fire Reported in Gulf of Mexico
Scroll to top