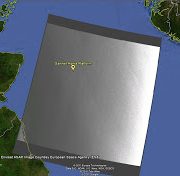 Just got a radar satellite image from the European Space Agency (ESA) – it’s from their Envisat satellite, ASAR sensor. It was taken on August 13 over the North Sea, where Shell has been dealing with an oil spill from a pipeline near their Gannet Alpha platform.  At last report, Shell claims that they’ve spilled 67,000 gallons and that the failed pipe holds an additional 185,000 gallons, making this the worst spill in UK waters in ten years.

The leak apparently began on August 10, and was first reported on August 12.  We were hopeful this August 13 image would show the slick so we could estimate the size of this spill. But it’s a blank – monotonous gray, with some broad faint streaks running diagonally from north-northwest to south-southeast that suggest the North Sea was being blasted with very strong winds when this image was taken, rendering the image unusable for detecting oil slicks.  Bright spots around the Gannet Alpha marker show platforms and possibly large vessels; as big angular hunks of metal, both are excellent radar reflectors: 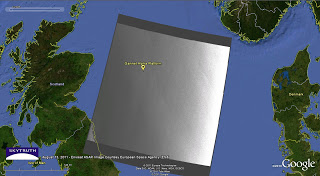 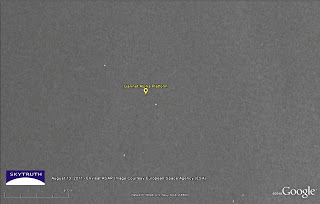 We’ll keep looking for new images that might show what’s going on here.