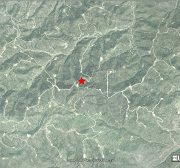 We had some action here in the mid-Atlantic yesterday that would make the folks in California yawn, but is pretty unusual around these parts – a magnitude 5.8 earthquake centered in Virginia, that was felt far and wide. There have even been a couple of small aftershocks. Paul and Teri report that the shaking was obvious in Shepherdstown, and my wife Amy said it seemed to last for a long time:

I was terrified – I thought a tree was coming down and would hit the house, or a truck was running into the house.  I ran to the open door to try to figure things out. Then I thought it was a military aircraft.  But it went on for a long time time (or so it seemed) and I figured it was an earthquake.

And just a day earlier, there was a similarly moderate quake (5.3) that struck along the Colorado-New Mexico state line near Trinidad.  There has been a swarm of small, shallow earthquakes in this area in recent years; because this swarm sits right in the middle of a very active coalbed methane drilling play (known as the Raton Basin, including drilling on the nearby Vermejo Park Ranch property owned by Ted Turner), there is some speculation that these earthquakes are actually being triggered by either the withdrawal of natural gas from the rocks, or the injection of water produced from the CBM wells back into the ground for disposal.

It’s not as wacky as it sounds.  Disposal of fracking fluids by deep injection was implicated in an unusual earthquake swarm in Arkansas earlier this year; and similar quakes in 2005 happened here in the Raton Basin. This USGS report on a 2001 earthquake swarm also raises the possibility of seismic activity induced by the injection of fluids for disposal (note: fluid disposal by deep injection is NOT the same thing as fracking; but it is a consequence of natural-gas production in some places).

Everything Old is New Again