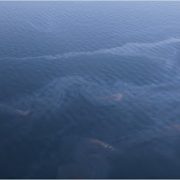 Bonny Schumaker from On Wings of Care has been very busy flying the Gulf lately.  Yesterday she flew out over the site of the BP / Deepwater Horizon oil spill.  About 16 miles northeast of the spill site, she ran across extensive oil slicks that look to us like a lot more than the typical natural oil seep normally produces.  Check out her report with a photo gallery and video.

There is a known seep location less than 2 miles to the south.  The nearest oil platform is 8 miles to the east; the closest pipeline is >5 miles to the northeast.  MODIS satellite images taken yesterday afternoon showed nothing unusual in the area, and the most recent radar image for the site was taken back on August 26.  We’ll keep looking and let you know what we learn. 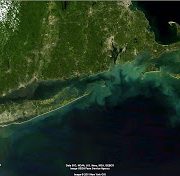 But the brown plume in Raritan Bay just above the right corner of our logo shows sediment coming from runoff into the Raritan River. The Hudson River north of Manhattan is bright orange-brown, also full of sediment and other surface runoff that hasn’t quite made it to the coast yet.  This runoff can be pretty nasty stuff, laced with untreated sewage, agricultural chemicals, oil and other miscellaneous gunk.

We expect to see major plumes of runoff in the coastal waters up and down the eastern seaboard this week as the torrential rain dumped by Irene works its way to the ocean. 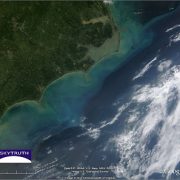 The intense wind and wave action kicked up by Hurricane Irene left its mark along the eastern seaboard. Sand and sediment eroded from the beaches and stirred up from the seafloor created a broad belt of turbid ocean water that appears a gorgeous shade of turquoise in this MODIS / Terra satellite image shot yesterday afternoon:

Zooming in to North Carolina’s Outer Banks, we can see some brownish plumes in the water that are probably sediment runoff from the coastal rivers that were deluged with rainfall from this storm:

Hopefully we’re not seeing a repeat of the widespread failure of hog-waste impoundments in this area that followed Hurricane Floyd back in 1999: 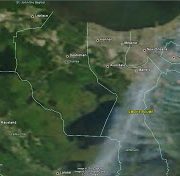 A quick update – yesterday’s MODIS satellite image shows the plume of smoke from a burning marsh blowing to the south-southwest, affecting a big chunk of the city of New Orleans and parts of the Jefferson, Lafourche and Terrebonne parishes:

Thick smoke was drifting yesterday over the communities of Chalmette, Braithwaite, Marrero, Galliano, Chauvin, Dulan and Theriot, then heading out over the Gulf, making a visible plume that extended nearly 300 miles from the source of the fire – much longer than the smoke plume we observed while the Deepwater Horizon rig was burning last April. 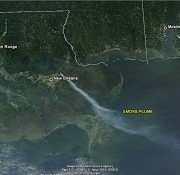 Serendipity: in conducting our regular daily monitoring of satellite imagery for oil pollution in the Gulf of Mexico, we noticed a huge plume of smoke coming from the east side of the city of New Orleans on this NASA/MODIS satellite image taken early Saturday afternoon:

We tweeted about this at 7:14pm eastern, and in the wee hours this morning @dmyersloyola replied that we’d identified a large wildfire burning in a marsh on the edge of town.  (Are you following us on Twitter yet?)  Here’s a video report on the fire. It’s extremely smokey, a serious air-quality problem and public health concern for nearby residents.  It was possibly triggered by lightning.