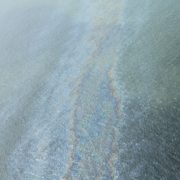 A quick update on the chronic leak we’ve been following at the former site of an oil platform reportedly destroyed by Hurricane Ivan in 2004.  RigData reports that the semisubmersible drilling rig that has been intermittently working to plug the leaking wells at this site, the Ocean Saratoga, has been towed away to work on a short-term drilling job elsewhere:

Ocean Saratoga has moved to Green Canyon Block 50 for a short-term well with Nexen Petroleum U.S.A., Inc. on a sublet from Taylor Energy Company, LLC. The work will last for around 20 days, which will conclude Taylor’s contract time on the rig. Upon completion of the work, the rig will go into shore for its five-year survey, which will take 45 days.

So the question is: who is working to plug the continuing leaks at this site?  The most recent overflight on July 1 shows an oil slick but no rig at the site, indicating that the work is not finished:

That raises another question: is anyone being fined for this years-long, continual pollution of the Gulf of Mexico? Federal authorities claim the wells are leaking at an average rate of about 14 gallons per day (although satellite evidence suggests a much greater leak rate).  Hurricane Ivan made landfall on September 16, 2004, so it’s been at least 2,496 days that this leak has existed.  At 14 gallons per day that’s 35,000 gallons (832 barrels) of oil into the Gulf; if the basic $1,100 per barrel fine was assessed under the Clean Water Act, Taylor Energy would now be liable for a fine of almost $1 million.  But if they’re not facing any fines, there’s no incentive for them to expedite the plugging operation and stop this leak – especially if they can sublet the rig out to another company for what we suspect is a lucrative drilling job.

A recent study concluded less than 1% of the spills into Gulf waters off Louisiana resulted in any fine, and the fines that are assessed are ridiculously small compared to the profits realized from offshore oil and gas production.  Why is weak and inconsistent enforcement such a big deal? Because it sets up what economists like to call a “moral hazard,” encouraging companies to engage in risky behavior that they otherwise might think twice about.

And that burgeoning culture of sloppiness, if left unchecked by consistent and vigorous monitoring and enforcement, will inevitably lead to the next catastrophic oil spill.

BP Spill Stopped One Year Ago Today – 5,000 Spills Since Then
Scroll to top