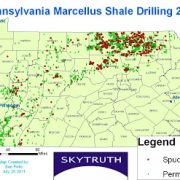 SkyTruth’s Marcellus fracking monitoring project to a big step forward with our recent (first week of July) trip into the field. Being on the ground observing the sites, the pipelines, road work and traffic that all revolve around the massive drilling industry presence in the region was an eye-opening experience. In studying the rapid development of natural gas development in Pennsylvania one has to wonder at the speed. The feeling is half one of admiration and fear. The admiration stems from the vigor, speed and manpower which the industry is putting to the extraction of natural gas. The fear is that so much is being done so quickly with so little oversight. It is not easy to play catch-up, but for the agencies responsible, the DEP and EPA, catch-up will be all they can do. Once a problem is found it can be dealt with, but unless someone is out in the streams monitoring them, then identifying the true cause is not easy.

The activity is hot in PA this year (a spud is a location where drilling operations have begun): 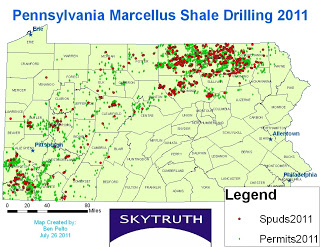 With plans to head out for further field sampling in the final weekend of July, we will revisit the same sites again to measure the comprehensive water quality the Wysox and Meshoppen watersheds. We will use an approach where we are sampling throughout the watershed to establish norms for what to expect and better pinpoint any changes in vital signs, be it visual or quantitative (conductivity levels, turbidity readings). We aim to use our data in part to gain knowledge in order to accurately construct ‘load maps’ for watersheds in PA. A load map is intended to reflect the number of drill sites or permits per square mile in a watershed.

Below it can be seen that many watersheds have high density of drilling scheduled to come soon: 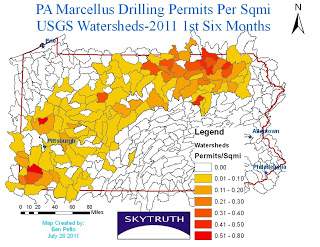 In western PA the watersheds of Little Connoquenessing, and Tenmile Creek show high levels. The permits used to make the map are from the past six months. Generally once a permit is obtained drilling starts with in 3 to 6 months, so a high density of new permits means locals can expect a frenzy of fracking in the near future. In northern PA the watersheds of Larry’s Creek, Wysox Creek and East Branch Wyalusing have high permits levels.

The load approach looks to be a valuable one, and according to research done by scientists of the National Academy and a University of Pennsylvania grad student, the impact of drilling seems to be tied to the density of drilling in a specific area (a watershed in our case). It appears that there is a ‘threshold point’ where it becomes environmentally degrading regardless to the care of the drilling companies.In the watersheds in which we visited, it seemed that individual drill pads looked fine, if not a scar on the land, but once we were in the air (courtesy of LightHawk) the sheer amount of activity was gut-wrenching.