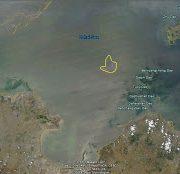 A MODIS/Aqua satellite image taken June 14 captured a serious oil spill in China’s Bohai Bay.  Apparently the spill began from an offshore field called Penglai 19-3 operated by Conoco-Phillips on June 4, but the public was only recently informed. Chinese authorities have launched an investigation.  In their official statement the State Oceanic Authority noted that the oil slick polluted an area of 840 square kilometers (336 square miles), and that the spill has been controlled although some oil continues to enter the sea from “small leaking points.”

We’re not sure what that means, although from this description it sounds like there were separate problems at platform B and platform C, and that platform C may have suffered a loss of well control (a blowout) at the seafloor on June 17 – after the image below was taken:

Most of this area in eastern China is obscured by clouds, heavy haze, fog and dust storms on the NASA/MODIS satellite images taken over the past month.  On June 14, though, this MODIS/Aqua image captured the oil slick under relatively clear skies.  On that day the slick appears to cover about 314 square kilometers.  Assuming 1 micron thickness, that would amount to 83,000 gallons of oil, but that should be considered a bare-minimum estimate for this spill.

We’ll keep analyzing the imagery in coming days to see if there are ongoing problems in the Penglai field.

Bohai Bay Oil Spill – Lessons for Arctic Drilling?
Scroll to top
SkyTruth and/or its third party tools use cookies to monitor traffic in the aggregate on our websites and applications and to improve user experience. If you continue browsing, we'll assume you agree to the use of cookies. You can change your cookie settings at any time in your browser settings. Find out more in our privacy policy.