The “Frack Pack” (Ben, Michelle and Ed and Paul) is back from our expedition to frack country in north central PA, and now we’re poring over all the data we collected last week. We don’t have the data fully transcribed and processed yet, but I thought I would take a minute to share a quick report of our recent experience.

The goal of our expedition was to demonstrate that we can effectively predict where drilling hotspots will be in the coming months based on permit activity at the state level, and then conduct water sampling in adjacent streams to measure potential surface water impacts before, during and after the peak activity.

To do this we take new drilling permit approvals that we get from the Pennsylvania DEP, and project which permits will be drilled in the next 3 months based on past activity and past drill completion reports. Then we look at which watersheds contain the most soon-to-be drilled sites, and target those watersheds for water quality sampling.

So last month, we consolidated permit approvals from January through May and overlaid that on a map of the watersheds in the upper Susquehanna to determine which watersheds were most at risk of impacts in July and August. From that list we picked three to target, the Wysox, Meshoppen, and the Upper Pine. 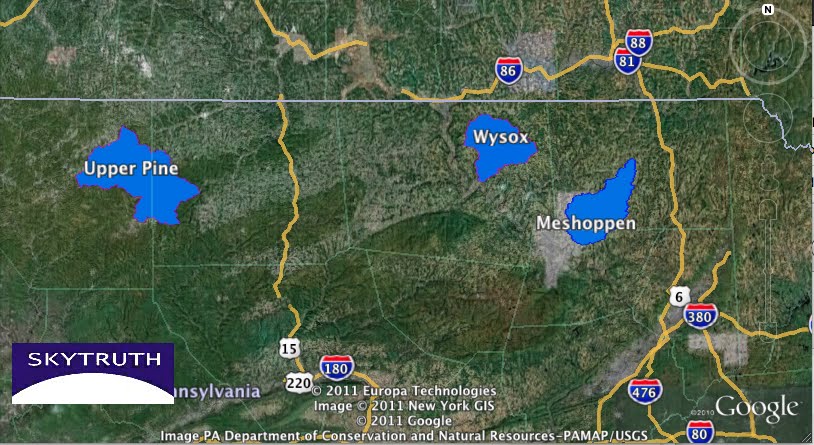 Unfortunately, Google Earth only showed high quality imagery for the area from 2005, so there was no evidence of any new Marcellus drill pads there. And our friends at NASA had no recent, high quality (and free) satellite imagery available, so we looked around and found some decent aerial imagery available for the state of PA from summer 2010.

Using the newer imagery, we could see plenty of existing well pads, but we could also see that many of our recently permitted drill sites were in areas that had not been cleared as of summer 2010, so we were confident that we would be able to see fairly recent clearing and drilling activity.

For the 3 watersheds we found 16,17 and 14 clusters of permits in each, for a total of just under 47 sites to look at. Many of the sites are on private land, and not easily accessible from the public roadways, so we needed a way to get a good look at these sites so we could determine the level of activity at each. To solve this problem, we turned to our friends at LightHawk who were able to supply us with a plane and a pilot to fly us out of Elmira, NY for a 2-hour tour of our study area. 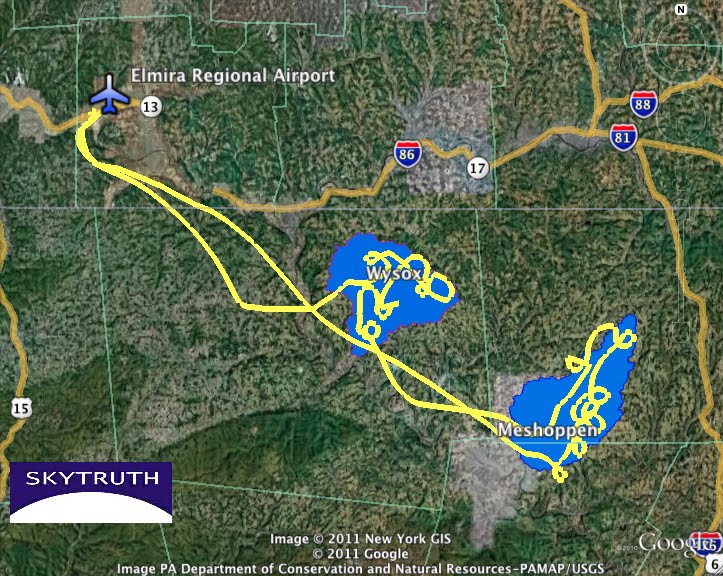 After the flight (which was a great success), we set out to get water quality samples in the streams near to the sites where we had observed the most recent activity. In general this effort went quite well, though the recent dry spell made for some pretty low flows in some of the smaller streams, and a few local property owners were a bit prickly to see a bunch of outsiders poking around in their streams, but all in all we collected some good data. We got an inch and half of rain on Saturday night, (3 out of our 4 tents came through it nice and dry – one team member had to bunk in the car), so on Sunday we got to collect a few post-rain event samples which will give us a nice comparison to the pre-rain measurements we made.

Like I said at the beginning, the data is still being transcribed from our notebooks, so we can’t say much about that yet, and we are only looking at one sample per location right now, so we will have to go back and get more samples next month to see if we can see any changes. We will also be analyzing the excellent water quality monitoring data set provided by the Susquehanna River Basin Commission that has some permanent water quality monitoring stations in the area.

One thing we can say from our observations is that there is WAY too much sediment in these streams, which could be due to widespread land clearing for well pads, and perhaps more significantly, greatly increased road construction and road traffic creating large amounts of dust and storm runoff.

Stay tuned for future reporting based on our water quality measurements including Temperature, pH, Conductivity and Turbidity.

Closing The Book on This One – For Now
Scroll to top