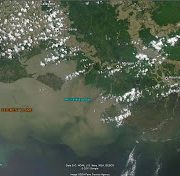 Flood waters are working their way through the lower Mississippi River system. On May 14 the Army Corps of Engineers began opening floodgates at the Morganza Spillway to divert some of the floodwater out of the Mississippi and into the adjacent Atchafalaya River to ease pressure on the downstream levees protecting Baton Rouge and New Orleans. Ten days later they began closing the gates again as the flood level on the Mississippi crested and began to recede at Morganza.

This diversion of sediment-laden river water intentionally flooded parts of the much less densely populated Atchafalaya Basin.  It also has shifted a lot of the sediment and other gunk that normally would flow down the Mississippi and be released in deep Gulf of Mexico waters at the mouths of the Mississippi Delta, to the shallow coastal waters of western Louisiana and eastern Texas. This plume of runoff from all the farms, cities and sewers of the nation’s midsection is responsible for the annual appearance of an oxygen-deficient “dead zone” in the central Gulf.  There are concerns now that this year’s dead zone will be larger than ever, and will have more of a direct impact on the coastal waters that support an important fishing industry working to recover from last year’s catastrophic oil spill.

Eyes in the Sky – Pollution Monitoring