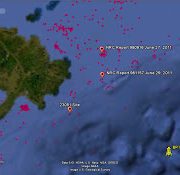 Another day, another spill in the Gulf. Or two.

Yesterday’s MODIS/Aqua satellite image shows a couple of small slicks in the Main Pass area, a region jam-packed with offshore oil and gas platforms and pipelines.  The two slicks we’ve outlined in yellow below appear to be closely associated with two recent National Response Center oil spill reports, one (#980916) submitted on June 27 and the other (#981157) on June 29.  The report on June 27 indicates the spill location (but not necessarily the source) as a manned oil/gas platform in Main Pass Block 299, installed in 1991 and operated by Freeport McMoRan Energy LLC.  (LLC…really?  Think about that for a moment.  This is a division of a multinational mining and energy conglomerate that, among other things, operates the massive Grasberg Pit in West Papua that is steadily smothering lowland rainforest with tailings.)  No amount spilled, or estimate of the size of the oil slick, is given in the report.  The slick is described as being dark brown, which indicates something thicker and more substantial than the “unknown sheen from unknown source” so frequently described in NRC reports.

The possible slick seen on the June 29 MODIS image in that area covers 75 km2.  At 1 micron (one 1,000th of a millimeter) thick, that would be 19,800 gallons (a “medium” spill by Coast Guard definition).  But standard guidelines for estimating a slick’s thickness from its appearance put a “dark brown” slick in the 50 micron range.  That would be a spill of 990,000 gallons (23,571 barrels), and a Clean Water Act fine of 26 to 101 million dollars. But somebody in the federal government needs to step up and actually start fining companies for these spills (our intern Michelle is looking into this enforcement question).  We think this is critical to improve offshore drilling safety:  a credible and consistent financial incentive for operators — large and small — to take better care of business, one of the keys to avoiding the next major spill.

The June 29 report describes a 125-gallon spill in Main Pass Block 313 creating a “silvery sheen” (very thin slick) of oil about 26,000′ long x 2,600′ wide drifting southeast from the source.  The report gives the spill location (again, not necessarily the source) as a platform operated by Chevron.  This roughly matches what we observe on yesterday’s MODIS image: a possible slick that’s about 9 miles long and 25 km2 in size, beginning about 3-1/2 miles southeast of the platform location.  Assuming the slick is 1 micron thick, the total amount of oil it contains should be closer to 6,600 gallons (157 barrels).