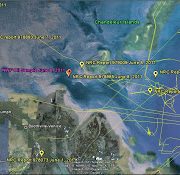 We’re homing in. It looks like news reports placing the slick “about 2 miles southeast of Baptiste Collette [Bayou]” were a bit misleading.  NRC report 978985 filed on June 8 contains that same description, but also a precise latitude/longitude location that actually places it 2 miles north-northeast of the mouth of the bayou, about 4 miles west-southwest of the southern tip of the Chandeleur Islands (Breton National Wildlife Refuge).

The oil-slick sample collected by National Wildlife Federation scientists, that shows the oil to be relatively fresh crude not related to the BP spill, was taken on June 8 from a point just two-tenths of a mile away, so we’re pretty confident they actually sampled the slick that has been in the news: 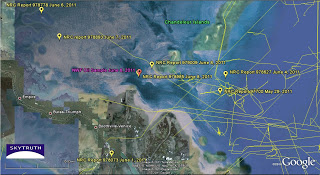 What’s not clear yet: Where is the cleanup activity taking place?  And what was the source of this spill?  The area is chock-full of old platforms and pipelines; some of the pipelines are shown in yellow on the map above. The NRC spill reports in the area don’t shed much light on a possible source, if you take at face value the spill amounts in those reports (by the way, Anglo-Suisse:  how’s that investigation coming along?)

Our Gulf Monitoring Consortium partners, SouthWings, conducted an overflight of the area this afternoon with a passenger from Gulf Restoration Network, using the coordinates we provided.  They observed a small slick in the same location as NRC report 978985 and NWF sample. GRN will be blogging and posting the pics shortly.

Even more interesting: they encountered a TFR (Temporary Flight Restriction) zone over the area.  The SouthWings pilot was permitted to enter, and tells us that unmanned aerial drones (UAVs) were operating in the area.  Cool!  Hopefully the Coast Guard is using those drones, which means they are really upping their game  and bringing some high-tech tools into oil spill investigation.

We hope that’s the case.  If so: polluters beware.  It’s getting a lot tougher to hide what you do.

Oil Slick Near Venice, Louisiana – Photos Identify Possible Source
Scroll to top
SkyTruth and/or its third party tools use cookies to monitor traffic in the aggregate on our websites and applications and to improve user experience. If you continue browsing, we'll assume you agree to the use of cookies. You can change your cookie settings at any time in your browser settings. Find out more in our privacy policy.