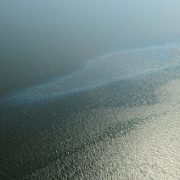 We hope not, since we’ve provided plain-as-day photos of a leaking platform not far from where the slick off Venice, Louisiana was first reported.  Maybe the Venice slick had another as-yet unidentified source, but the slick encountered by our Gulf Monitoring Consortium partners from a well likely owned by Saratoga Resources, Inc. clearly indicates a problem at this precise location:  29°31’29.40″N /  89°19’60.00″W.

What’s not clear: what – if any – action will be taken by state and federal officials to address that spill? 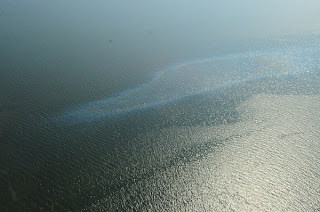 At any rate, the Coast Guard has declared the cleanup of the slick off Venice “complete,”  even though no oil was actually cleaned up – apparently it all dissipated before coming ashore.

We’ll let you know when as learn more about this unresolved incident.

Oil Slick Near Venice, Louisiana – Who Owns the Well?

Marcellus Shale Drilling and Chesapeake Bay Water Quality
Scroll to top
SkyTruth and/or its third party tools use cookies to monitor traffic in the aggregate on our websites and applications and to improve user experience. If you continue browsing, we'll assume you agree to the use of cookies. You can change your cookie settings at any time in your browser settings. Find out more in our privacy policy.