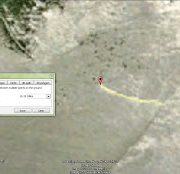 It’s the Energizer Bunny of leaks: yesterday’s MODIS/Terra satellite image of the Gulf shows a 10-mile-long oil slick emanating from the site of Taylor Energy’s destroyed platform, where wells damaged by hurricane Ivan in 2004 have been leaking oil ever since:

We’ve now collected dozens of satellite images and air photos showing a persistent oil slick at this site, including this image from June 19 showing a slick at least 17 miles long, and possibly more than 30 miles long (a small patch of clouds interferes with the view):

So what’s happening here to finally stop this chronic oil spill? One of our readers just noted that there is no evidence of vessel activity at the site now.  According to the latest Diamond Offshore rig status report (dated June 14) the rig that’s been working to plug the leaking wells at this site – the Ocean Saratoga – is scheduled to be pulled off the site by mid-July and sent to a 5-year job elsewhere in the Gulf. If there isn’t any tracking data indicating vessel activity at the site, maybe they’ve already pulled out – without completing the job, based on the 10-mile-long slick we observed yesterday.

According to their rig status report, no other Diamond Offshore rig is assigned to the site. Maybe another drilling company is under contract to bring in a rig to continue the plugging operation.

This plugging operation is obviously a low-priority job. Possibly because, as far as we can tell at this point, no fines are being levied against the operator for the oil being continuously spilled into the Gulf at this site — so they have no financial incentive to pay higher rates to get the plugging job done quickly. Our summer intern Michelle is working to help us determine who to blame for setting up this moral hazard: the Coast Guard? BOEMRE? EPA? Department of Justice?

Oil Slicks in Gulf of Mexico
Scroll to top