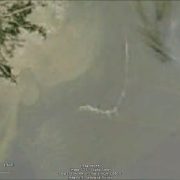 We’ve been watching the site of former platform #23051 in the Gulf since the BP spill last summer, when we discovered an unrelated chronic leak at this location. The most recent air photo from the site shows it still leaking in March.

And now this: today’s MODIS/Terra satellite image shows what appears to be an 18-mile-long oil slick emanating from this location. We’ve been told the site leaks an average of only 14 gallons per day. Once again we see evidence suggesting a much larger leak. See for yourself: 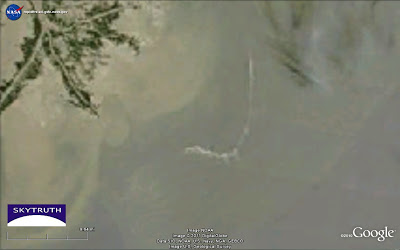 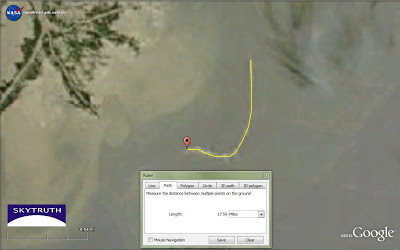 The total area of this slick is about 40 square kilometers. Assuming a minimum thickness of 1 micron (1/1000th of a millimeter) this indicates a total volume of 10,560 gallons of oil. At 14 gallons per day it would take 2 years to leak that much oil. But a micron-thick slick can survive at sea for no more than a couple of days at most before it dissipates.

Something isn’t adding up…

We need your help. Volunteers needed. Apply Within!