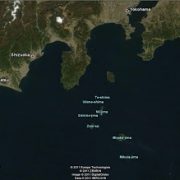 There’s still a good bit of snow up in the mountains. No obvious signs of the earthquake and tsunami damage on this low-resolution imagery, and the turbidity that we observed along the northeastern coast in the first few days following the quake seems to have dissipated or settled out.

Sharp-eyed viewers will note a pale blue plume blowing to the southeast from the island of Miyakejima. This is apparently a plume of sulfuric gases that have been emanating from Mount Oyama, an active volcano on the island, since the last series of eruptions began back in 2000: 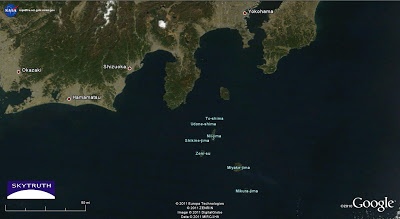 Strong aftershocks continue to shake this traumatized region, including a 7.4-magnitude quake yesterday that prompted a brief tsunami warning.

Offshore Drilling, Onshore Spilling
Scroll to top
SkyTruth and/or its third party tools use cookies to monitor traffic in the aggregate on our websites and applications and to improve user experience. If you continue browsing, we'll assume you agree to the use of cookies. You can change your cookie settings at any time in your browser settings. Find out more in our privacy policy.