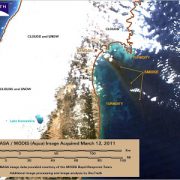 The dark brown smoke plume stretches to the southeast, reaching at least 115 kilometers (73 miles) over the ocean.

Notice the bright turquoise patterns in the water; this is turbidity, quite possibly sand stirred up from the seafloor by the scouring action of the massive waves, and debris and sediment from flooded coastal areas dragged out to sea as the waves receded. Clouds and snow are bright white in this image, processed to enhance the smoke and turbidity: 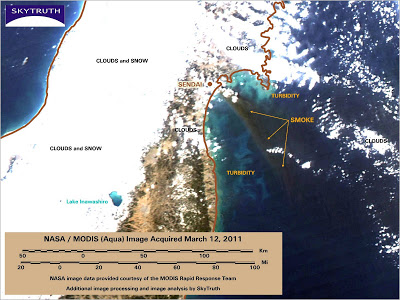