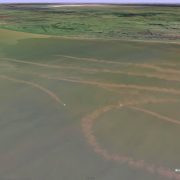 Way back last autumn I had a nagging thought: once oil impacted areas of the Gulf were re-opened to fishing in the wake of the BP / Deepwater Horizon spill, would shrimp trawlers repeatedly churn up oil that had settled on the seafloor? 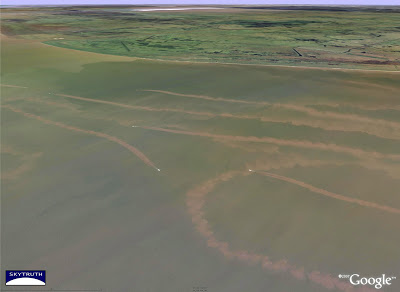 As the federal government proceeds with a long and complicated legal and scientific process, the Natural Resources Damage Assessment, they are holding a series of public meetings to get input and comments from affected Gulf-area residents. At a meeting last week in Biloxi, Mississippi,

Vietnamese shrimpers said they have pulled up nets full of oil from the seafloor and have had to decide whether to report the oil to the Coast Guard, which would mean dumping their day’s catch, or pretend they don’t see the oil.

John Lliff, a supervisor with NOAA’s Damage Assessment Remediation and Restoration Program, said no one knows how much of the seafloor is covered in oil.

Until the oil totally disappears, it seems highly likely that this will continue. But we don’t have a clue how long the oil will linger, or what the impacts of this would be on the health of fishermen, the recovery of the Gulf ecosystem, or the safety of seafood.

Meanwhile, some of our politicians seem to be ignoring the fact that the world’s worst accidental oil spill happened here in our own back yard less than a year ago, and are intent on returning to business as usual without assuring the public that drilling is any safer than it was last April. Does anybody else see this as a recipe for another disaster?

Interns wanted, apply within!
Scroll to top
SkyTruth and/or its third party tools use cookies to monitor traffic in the aggregate on our websites and applications and to improve user experience. If you continue browsing, we'll assume you agree to the use of cookies. You can change your cookie settings at any time in your browser settings. Find out more in our privacy policy.