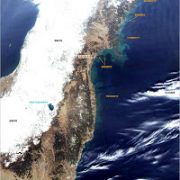 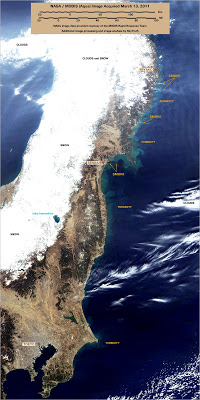 Clear skies follow tragedy: this MODIS / Aqua satellite image to the left was taken on March 13, 2011 at about 12:55 pm local time in Japan. Click on it to see a larger version.

Striking bright aqua and turquoise patterns in the water reveal turbidity along much of the Pacific coast of northeastern Japan.

This turbidity is probably sand, churned up off the seafloor and scoured from beaches by the massive magnitude 8.9 earthquake and series of destructuive tsunmami waves that it generated; and mud and debris washed off lowlying coastal areas that were inundated by the tsunami.

Several plumes of smoke are visible as well, blowing eastward off the coast and out to sea. Three faint white plumes are visible between Miyako and Sendai. A fourth plume, dark brown, continues to emanate from the city of Sendai and may be caused in part by a fire at a major petrochemical facility.

Radiation leaks from crippled nuclear reactors along the coast are a serious concern at this time. If prevailing winds continue to blow from the west, releases of radioactive gases into the air should move offshore.

2011 Japan Quake and Tsunami – Before / After Images
Scroll to top
SkyTruth and/or its third party tools use cookies to monitor traffic in the aggregate on our websites and applications and to improve user experience. If you continue browsing, we'll assume you agree to the use of cookies. You can change your cookie settings at any time in your browser settings. Find out more in our privacy policy.