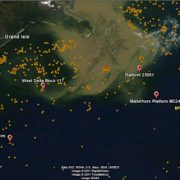 Still trying to pin down exactly what happened in the Gulf last weekend. The Coast Guard has reported that a well south of Grand Isle that was being plugged and abandoned leaked on Saturday for 4-6 hours for some reason, with oil showing up on the beaches of Grand Isle, Elmer’s Island and Fourchon. Cleanup is continuing although no new oil is washing ashore. [UPDATE 5:56pm – see pics of oil coming ashore]. 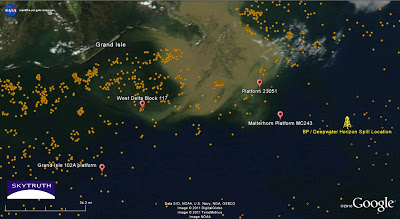 We’ve looked at low-resolution MODIS satellite images of the Gulf over the past few days and haven’t seen any signs of a large oil slick, although this aerial pic that was reportedly taken by the Jefferson Parish Department of Emergency Management appears to show a sizable oil slick, with relatively thick brownish-red stringers of weathered crude oil surrounded by thinner sheen. MODIS images aren’t always suitable for oil slick detection, so we’re still looking. At this time, yesterday’s images are mostly incomplete and don’t fully cover the affected area.

This morning we called the Coast Guard public affairs office in Louisiana to ask a simple question: where is this well located? The answer: “that is under investigation.” They couldn’t tell us the name of the platform, who the operator is, or even what protraction area it is in.

Some possibilities have been mentioned in various press accounts. This report claims the leaking well is at a hurricane-damaged platform operated by Anglo-Suisse Offshore Partners, LLC. A 2006 news release from the former U.S. Minerals Management Service shows that Anglo-Suisse had a cluster of five platforms in West Delta Block 117, about 30 miles southeast of Grand Isle, that were destroyed by Hurricane Katrina in 2005. Maybe the well was under one of those now long-gone platforms. That’s our bet: it’s close to Grand Isle, and satellite pics of the past few days show currents are sweeping masses of sediment-laden water from the Mississippi River through the West Delta 117 area and straight toward the beach. Any spilled oil at that location would most likely get caught up in that current.

But other reports hinted at problems at the site of the Matterhorn SeaStar platform, a state-of-the-art “mini Tension Leg Platform” owned by W&T Offshore, whose stock prices nosedived Friday. W&T issued this statement today claiming the the slick is not coming from Matterhorn or any of their other nearby facilities. The TLP was installed in 2003, in water 2800′ deep, in Mississippi Canyon Block 243 about 28 miles due west of the BP / Deepwater Horizon site and 80 miles east-southeast of Grand Isle.

Another possibility, not mentioned in any news accounts we’ve seen, is the platform that caught fire on March 6 and was evacuated. Located in Grand Isle Block 102, it’s about 50 miles due south of Grand Isle.

Meanwhile, oil is continually leaking from the site of a Taylor Energy platform (Platform 23051) that was destroyed by Hurricane Ivan way back in 2004, and the Ocean Saratoga rig is back on site working to plug the leaks. You may recall we “discovered” that chronic leak during the massive BP spill last summer. Here’s a pic that Greenpeace took on Sunday of the oil slick there: 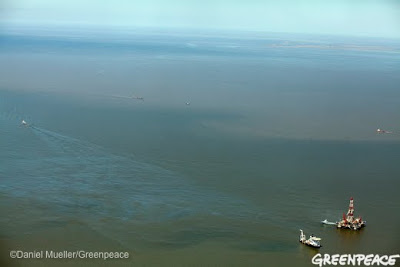 Photo of oil slick from chronic, ongoing leak at former site of Taylor Energy platform destroyed by Hurricane Ivan in 2004. Ocean Saratoga drill rig is working to plug the leaks.

Lots of questions. Here’s one more: In the wake of the world’s worst accidental oil spill, can’t we manage our offshore resources better than this?