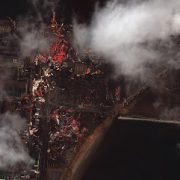 The Ring of Fire strikes again.

We’re starting to see satellite imagery of the damage caused by the massive earthquake and resulting tsunami that struck northeastern Japan yesterday (this aerial video shows the waves approaching shore, and the terrifying destruction as they sweep through coastal towns). Some resources:

DigitalGlobe has a Flickr gallery of high-resolution images and produced a cursory analysis (PDF). 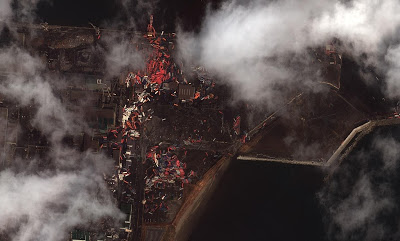 High-resolution satellite image showing shipping containers scattered by the tsunami in the port of Sendai, March 12, 2011. Image courtesy of DigitalGlobe.

The MODIS imaging team’s website at NASA now has a Japan Earthquake Project page. The low-resolution MODIS sytem captured an image at about noon local time on March 12, showing a large plume of smoke blowing out to sea from Sendai. Before-and-after images give a glimpse through the clouds of broad coastal flooding as of 10am local time yesterday.

Please submit a comment if you run across other useful sources of satellite imagery for this event.