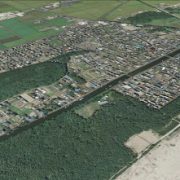 Lots of satellite images of this disaster, including very high-resolution images from Geoeye and DigitalGlobe, are now becoming publicly available, showing from above the destructive power of the brutal one-two punch Japan has endured. Here’s a panoramic before/after view of what used to be the pretty little coastal neighborhood of Arahama in the city of Sendai, 80 miles due west from the quake’s epicenter and in the immediate path of the nearly 30-foot-high tsunami that swept the coast. The ocean is at lower right. 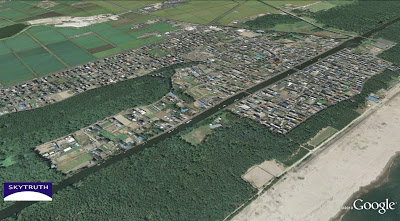 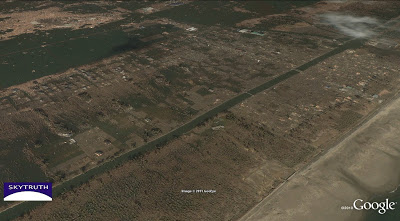 Many more before/after high-resolution satellite images can be seen by Google Earth users if you download this KML file from Google’s information-packed 2011 Japanese Earthquake and Tsunami Crisis Response website. The KML includes low-resolution MODIS and radar images too, and reports from folks on the ground that are being collected using Ushahidi, the same tool we’ve deployed to track impacts in the Gulf during the BP oil spill.

Don’t use Google Earth? There are several sites featuring collections of high-resolution images:

And NASA has a page featuring their low-resolution daily MODIS images, which we’ve found useful for illustrating smoke plumes and ocean turbidity.

Let us know if you find more useful images. Natural disasters aren’t our main focus here at SkyTruth, but if we can see a way to help when they occur we’ll do what we can.

Feds Issue 2nd Deepwater Drilling Permit in Gulf
Scroll to top
SkyTruth and/or its third party tools use cookies to monitor traffic in the aggregate on our websites and applications and to improve user experience. If you continue browsing, we'll assume you agree to the use of cookies. You can change your cookie settings at any time in your browser settings. Find out more in our privacy policy.