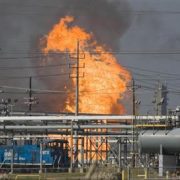 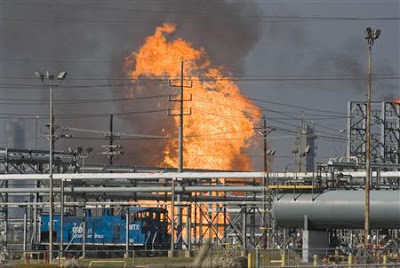 There’s been an explosion and fire at a natural gas storage and processing facility in Mont Belvieu, Texas, about 35 miles east of Houston. No injuries have been reported [UPDATE 2/10/11 9:30ET – one worker confirmed dead] but a massive fire and series of blasts have rocked the area. The cause is apparently a failure of “one or more” pipelines that deliver natural gas liquids to the processing plant.

This MODIS / Aqua satellite image taken shortly after yesterday afternoon’s explosion shows the fire as a bright orange spot, with a plume of brown smoke apparently trailing away to the north: 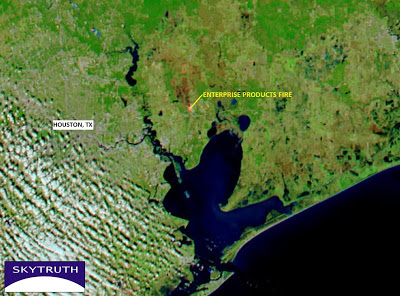 SkyTruth Comments on Deepwater Drilling Plan Pipeline Problems – A Homeland Security Issue
Scroll to top
SkyTruth and/or its third party tools use cookies to monitor traffic in the aggregate on our websites and applications and to improve user experience. If you continue browsing, we'll assume you agree to the use of cookies. You can change your cookie settings at any time in your browser settings. Find out more in our privacy policy.