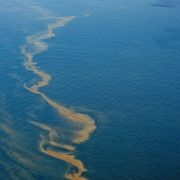 There have been conflicting reports coming from coastal Lousiana since October 22, suggesting that large areas of East and West Bays near Southwest Pass are covered with long streamers of what appears to be weathered oil, possibly originating from the BP / Deepwater Horizon spill. Some of the local fishermen insist it’s oil; the Coast Guard thinks it’s an algal bloom. Samples taken by the Coast Guard are awating analysis. [UPDATE 10/28/10 10:00 am ET – LSU scientists confirm the substance is mostly algae with only trace amounts of oil] 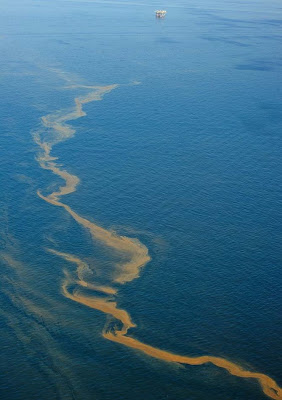 At SkyTruth we’re concerned that fishing activity could potentially stir up any oil that’s sitting on the seafloor, resuspending it in the water column. We don’t know if that’s what has happened near Southwest Pass. But we do know that bottom-trawling for shrimp in the Gulf routinely churns up the muddy seafloor, creating long sediment-laden plumes that trail for miles behind the trawlers and can be seen on satellite images. Check out our gallery of trawling images, and read more about it on this blog. 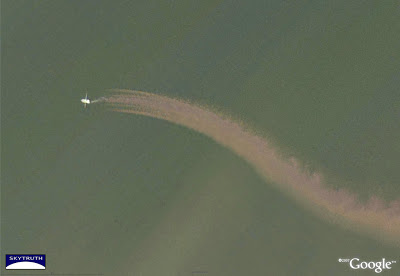 Google Earth image showing muddy plume of sediment raised by a shrimp trawler at work along the Louisiana coast. Image taken before the BP spill.

We don’t know what the effects of that could be. It might help the oil biodegrade more quickly. But it will also repeatedly expose marine life, including commercially important species, to oil that would otherwise remain on the ocean floor.

This suggests to us that it’s very important to quickly, accurately and thoroughly survey the Gulf seafloor for residual oil, so we can let shrimpers know what areas to avoid for now. 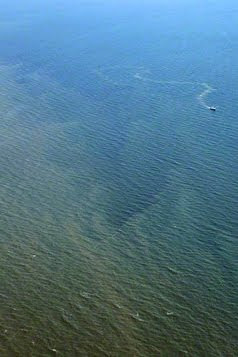