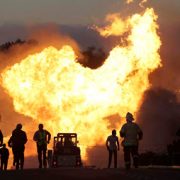 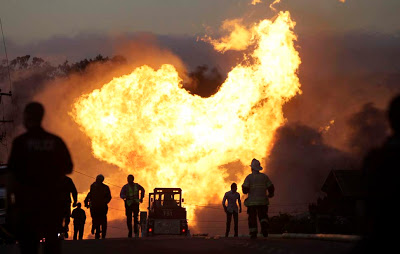 Tragic news coming out of California as the death toll has now reached 7, with 6 people still missing, from the massive pipeline explosion and fire that consumed 37 homes in San Bruno, just south of San Francisco (map and photo gallery from Los Angeles Times). The 30″ diameter high-pressure natural-gas pipeline, installed in 1956, ruptured shortly after 6pm local time on Thursday, September 9.

The explosion was so strong that USGS seismometers recorded it as a Magnitude-1.1 earthquake. 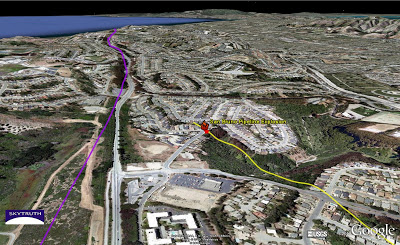 What caused this pipeline to rupture? Nobody knows yet, but this is of course a very seismically active region with notoriously unstable geology. The pipeline failure happened at the intersection of Earl Avenue and Glenview Drive, at the head of a steep ravine. Our analysis of the imagery in Google Earth (high-resolution aerial survey photography) suggests this ravine may follow the trend of a fracture zone in the bedrock that is roughly parallel to the San Andreas Fault, which lies just 1,000′ to the west of the blast site. It is possible that stress was steadily and incrementally building on the rigid pipeline as strain accumulated across this minor fault or fracture zone, or as soil gradually slid down into the ravine. Consider this analysis to be preliminary and highly speculative.

UPDATE 9/13/10 @ 11am – Check out the Pipeline Safety Trust’s web page for this disaster, and for more information on causes of pipeline failure, other incidents, and pipeline regulation and oversight.

BP / Gulf Oil Spill – This Dragon Is Dead
Scroll to top
SkyTruth and/or its third party tools use cookies to monitor traffic in the aggregate on our websites and applications and to improve user experience. If you continue browsing, we'll assume you agree to the use of cookies. You can change your cookie settings at any time in your browser settings. Find out more in our privacy policy.