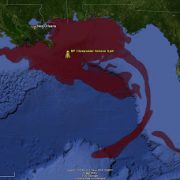 Thought it might be interesting to take a look at the work done by others on the BP / Deepwater Horizon oil spill in the Gulf of Mexico, and compare SkyTruth’s total cumulative oil slick analysis to theirs. Here is our analysis, based on visual assessment of dozens of satellite images acquired from late April through mid July: 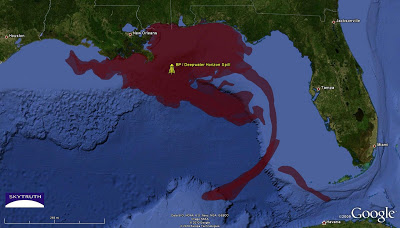 And here’s the official analysis done by NOAA, using many of the same satellite images, but also including many full-resolution radar satellite images that the public did not have access to (the US doesn’t operate any civilian radar satellites, so the radar images were purchased from foreign companies that don’t allow NOAA to “redistribute” the images): 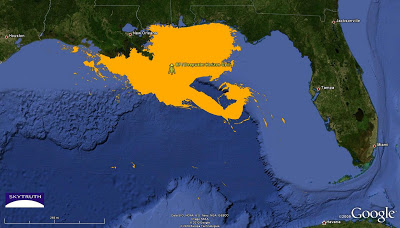 The folks at ROFFS (Roffer’s Ocean Forecasting Service) also analyzed satellite images and other oceanographic data throughout the duration of the spill, and just released their preliminary cumulative analysis. We don’t have it digitally yet, but we’ve clipped their graphic to roughly show the same area in our two Google Earth-based maps above: 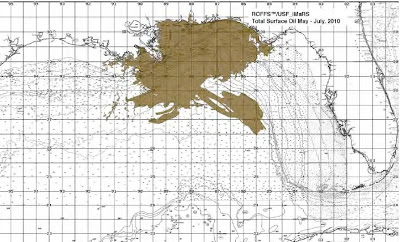 Overall, the NOAA and ROFFS analyses are in general agreement. The total NOAA oil-slick footprint covers 46,299 square miles (119,915 km2). SkyTruth’s analysis is similar except for our inclusion of possible oil sheen entrained in the Loop Current and entering Florida Straits late in May, before a large clockwise eddy (Eddy Franklin) got organized and effectively kept the slick bottled up the the northern Gulf for the remainder of the summer. The total oil-slick footprint in our analysis is 68,000 square miles (176,119 km2).