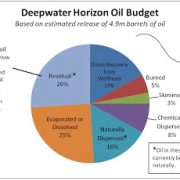 Yesterday the federal government weighed in on a complex topic: what happened to all the oil that spilled into the Gulf of Mexico from BP’s blown-out Macondo well? The joint report by NOAA and USGS lead some, including White House energy adviser and former EPA director Carol Browner, to make the claim that most of the oil that spewed into the Gulf this summer — an estimated total of 206 million gallons — is gone. Collected, burned, biodegraded or otherwise destroyed. Scientists have raised serious objections. 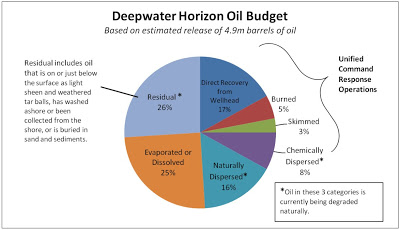 OK, let’s take a look at the actual report. According to the “Oil Budget Chart” above (Figure 1 in their report), NOAA estimates only 25% of the oil has been diverted, collected or otherwise definitively destroyed. The remaining 75% is still on or below the water’s surface or buried in marsh and beach sediments (26%); or it evaporated or dissolved (25%), was naturally dispersed (16%), or was chemically dispersed (8%).

Evaporation probably has moved a lot of the hydrocarbon out of the water and into the air. But “dissolved” and “dispersed” are not the same thing as “gone.” (Try drinking a nice tall glass of tea with a few spoonfuls of salt dissolved in it, and you’ll get what I mean.) NOAA is assuming rapid biodegradation of the dispersed and dissolved oil, which may be reasonable in relative terms — i.e., biodegradation in the hot Gulf is quicker than biodegradation in the frigid Arctic. But with no data provided on the actual rates of biodegradation, we don’t have any way of knowing just how much of the oil has naturally biodegraded at this point. We also don’t know what the intermediate breakdown products are, and what they do in the environment, and how long they last. Pesky but very important questions that can’t be answered quickly, or without a dedicated research effort that hopefully (??) is underway.

Total up the categories NOAA describes as “currently being degraded naturally” and you get 50% of the spilled amount, a whopping 103 million gallons (2.45 million barrels) of oil. That’s almost 10 times the size of the official Exxon Valdez spill.

Take the report at face value, agreeing that “only” 26% of the oil remains active in the environment, and you’re still talking about 50+ million gallons, almost 5 Exxon Valdez spills.

Coal Mining: SkyTruth Work Helps Link Mountaintop Removal and Water Polluti...
Scroll to top
SkyTruth and/or its third party tools use cookies to monitor traffic in the aggregate on our websites and applications and to improve user experience. If you continue browsing, we'll assume you agree to the use of cookies. You can change your cookie settings at any time in your browser settings. Find out more in our privacy policy.