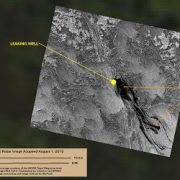 A few days ago we mentioned this small oil spill in the coastal wetlands of the Gulf that is unrelated to the big BP / Deepwater Horizon spill: on July 27, 2010, an abandoned well in Barataria Bay, Louisiana was hit by a barge and blew out. It’s been spewing a 100-foot-high geyser of natural gas and light crude oil since then, and the Coast Guard has reported that it may not be plugged for another week. 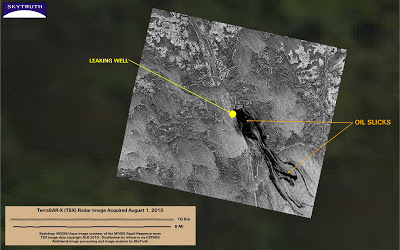 This image from Germany’s TerraSAR-X radar satellite was acquired at 7:08 am Central time on August 1, and shows the oil being spilled (black areas) from this ongoing incident. We got the well location (yellow dot) from NOAA’s Incident News report for this spill.

Michigan Pipeline Spill – A Warning Shot
Scroll to top
SkyTruth and/or its third party tools use cookies to monitor traffic in the aggregate on our websites and applications and to improve user experience. If you continue browsing, we'll assume you agree to the use of cookies. You can change your cookie settings at any time in your browser settings. Find out more in our privacy policy.