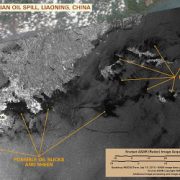 Sometime last week, two pipelines in the port city of Dalian, China, exploded and burned, and a large quantity of oil was released into the Yellow Sea. One firefighter lost his life. There are some harrowing pictures of oil-covered firemen being pulled from the water. Officials report that 165 square miles of ocean was covered with oil, but the pipelines are no longer leaking and cleanup is proceeding. Aquaculture is a huge business in China – Greenpeace estimates that 10,000 shellfish farms have been affected. 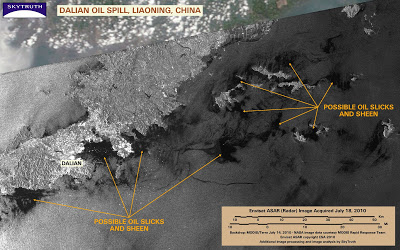 This Envisat radar satellite image appears to show patchy oil slicks spread out over a large area along the coast and islands near Dalian. China Central Television reported that the spill was estimated at about 400,000 gallons. If true this is far smaller than the BP /Deepwater Horizon spill in the Gulf of Mexico, although it’s worth noting that any spill greater than 100,000 gallons is labeled “major” by the US Coast Guard.

Some of the dark patches in this radar image may be areas of calm water rather than oil. This is a rugged coast, and strong topography can generate “wind shadows” on the downwind sides of rocky islands and coastal hills.

BP / Gulf Oil Spill – Here Comes Bonnie
Scroll to top
SkyTruth and/or its third party tools use cookies to monitor traffic in the aggregate on our websites and applications and to improve user experience. If you continue browsing, we'll assume you agree to the use of cookies. You can change your cookie settings at any time in your browser settings. Find out more in our privacy policy.