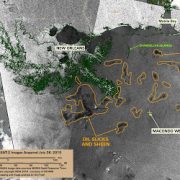 Radarsat images taken yesterday (July 26) show the oil slick is steadily dissipating. The failed Macondo well has been tightly sealed since July 15, so no new oil has been entering the Gulf for over a week. Oil floating at the ocean’s surface has a limited lifespan – it’s been collected and destroyed by skimming, booms, chemical dispersants, evaporation, photolysis, biodegradation – and took a beating from wind and waves when tropical depression Bonnie blew through over the weekend. If the well stays plugged until the static-kill and bottom-kill efforts permanently plug it with cement, then the remaining fragments of slick should disappear within days.

The big question: what’s the fate and impact of the oil we can’t see with satellite images? Oil now buried on Gulf coast beaches, embedded in marshes, and remaining dispersed underneath the water’s surface or lying on the seafloor? It will take diligent, systematic research to find the answers. We need to make sure that this research actually gets funded, conducted and published, and not sidetracked by litigation and confidentiality.

Here’s the July 26 imagery without SkyTruth’s analysis. Wind conditions (ranging from 3-6 meters per second) were nearly ideal for detecting oil slicks on radar imagery. Scattered dark patches of slick and sheen are spread across a wide area, but it appears that the oil slick created by the Macondo well blowout is steadily dissipating, and no new oil can be found around the well site: 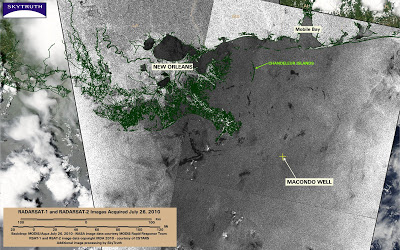 And here’s the version with our analysis of BP-related oil slicks and sheen, delineated in orange: 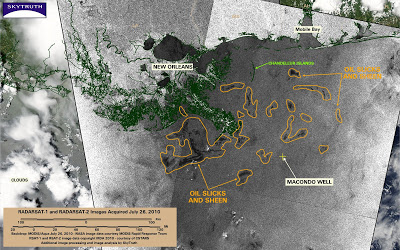 BP / Gulf Oil Spill – What Did Bonnie Do?