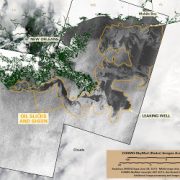 Two CSK radar satellite images (black-and-white) are superimposed on a cloudy MODIS satellite image (color) taken June 28, 2010. The radar on the left was acquired at 6:56 pm, and the image to the right at 7:44 pm local time on June 28. Only the western half of the oil slick is visible on these images: 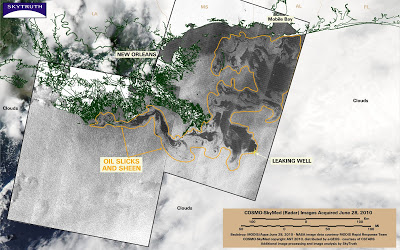 Tropical Storm Alex was roiling the Gulf when these images were taken. Weather data buoys in the vicinity recorded wind speeds of 6-11 meters/second (13-25 miles/hr), strong enough to break up areas of thin oil sheen and possibly render them undetectable. We infer that the dark areas enclosed within the orange line are thicker patches of oil slick. Oil is reaching farther to the west than we’ve seen recently, impacting Timbalier Bay and Terrebonne Bay.