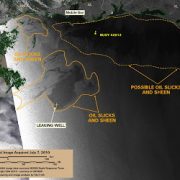 This satellite radar image taken by Envisat’s ASAR sensor at 10:44pm local time on July 7 shows a large patch of oil extending north from the site of the leaking Macondo well, and an area of small slicks along the Mississippi shoreline: 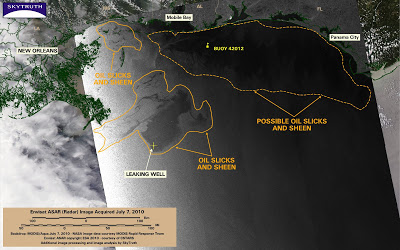 A large dark area extending from west of Mobile Bay to beyond Panama City may include patchy oil slicks and sheen, as seen in this area on previous days. But it is also an area of calm winds; the surface wind speed was measured at Buoy 42012 at 1 meter per second, gusting to 2 m/s, at the time this image was acquired. That’s on the low-end threshold for oil slick detection with radar imagery.

This infrared GOES weather satellite image taken within minutes of the radar image shows the skies are mostly clear in the area, with no sign of rainfall:

BP / Gulf Oil Spill – Stopped (For Good?)
Scroll to top
SkyTruth and/or its third party tools use cookies to monitor traffic in the aggregate on our websites and applications and to improve user experience. If you continue browsing, we'll assume you agree to the use of cookies. You can change your cookie settings at any time in your browser settings. Find out more in our privacy policy.