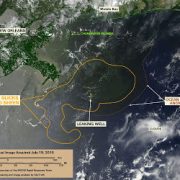 The cap on BP’s infamous Macondo oil well in the Gulf of Mexico is still shut, but small leaks have reportedly appeared on the seafloor around the well site. This is troubling because it suggests that the well casing is damaged and leaking somewhere below the seafloor. According to Coast Guard Admiral Thad Allen, one of those leaks is actually coming from an older abandoned well nearby – he goes so far as to say:

“it’s not unusual to have seepage around the old wells”

The AP recently did a story (featuring SkyTruth, among others) on the fact that there are 27,000 abandoned wells in the Gulf, and that abandoned wells on land leak so frequently that there is an ongoing need to re-plug them. I guess Admiral Allen confirms what the AP suspected – that this is also a problem with offshore wells. Who knew? Now we all do.

BTW, we wish folks would only use the term “seepage” when talking about natural oil and gas seeps on the seafloor, not human-caused leaks.

MODIS / Aqua and CSK radar satellite images taken on July 19 show oil slicks and sheen spanning about 7,868 square miles. This is almost twice as large as the area of slicks observed on satellite imagery from July 14, but still a lot smaller than it’s been on previous imagery. 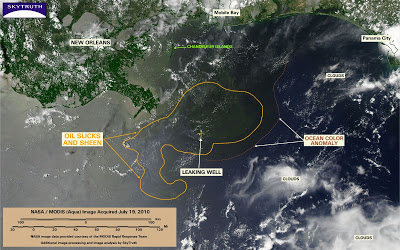 Oil slicks and sheen appear through a complicated assortment of clouds and haze on the MODIS image, taken at about 2pm local time on July 19, 2010. An area of anomalous ocean color (dashed line marks its eastern edge) appears to mirror the eastern edge of the area covered by surface oil slicks. This may be an indication of changed water chemistry in the area affected by the spill – possibly due to oxygen depletion as a result of the elevated levels of methane (natural gas) dissolved in the water.

The edge of the ocean-color anomaly seen on the MODIS / Aqua image is shown for reference on the CSK radar images taken a few hours later that same day: 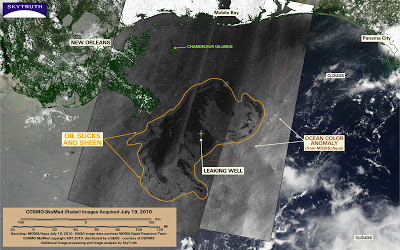 Satellite Imaging of Oil Slicks – A Primer
Scroll to top
SkyTruth and/or its third party tools use cookies to monitor traffic in the aggregate on our websites and applications and to improve user experience. If you continue browsing, we'll assume you agree to the use of cookies. You can change your cookie settings at any time in your browser settings. Find out more in our privacy policy.