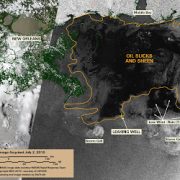 With oil continuing to billow into the Gulf of Mexico from BP’s failed Macondo well, the holiday weekend brought little cause for celebration, and no break for the folks working hard to clean up the oil coming ashore and to plug the leaking well. Oil was reported for the first time in Lake Pontchartrain, and the discovery of tar balls on some Texas beaches means this spill is now directly impacting all of the Gulf states.

A RADARSAT-2 satellite image taken July 2 shows oil slick and sheen still spread across a large area of the Gulf in the wake of Hurricane Alex, which brought large waves and strong gusty winds to the area last week: 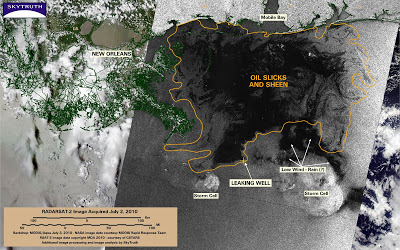 MODIS satellite images acquired on July 3 and July 4, while impaired once again by clouds, showed portions of the oil slick in a few areas. The July 3 image shows patches of slick along the Louisiana coast reaching west beyond Vermilion Bay: 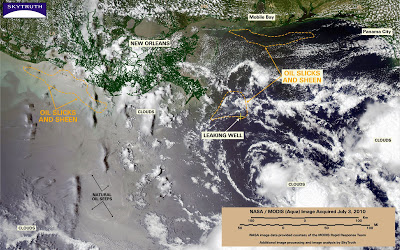 It also shows a neat little circular pattern formed by a cluster of natural oil and gas seeps; the small slicks that form at the ocean surface above these deepwater seeps appear to be caught up in a clockwise gyre (a rotating surface current).See all the images in our Deepwater Horizon Oil Spill gallery.
https://skytruth.org/wp-content/uploads/2010/07/SkyTruth_dhrig_spill-rsat-02jul10-interp.jpg 250 400 John Amos /wp-content/uploads/2016/08/test_logo.png John Amos2010-07-06 14:06:002019-02-27 16:17:45BP / Gulf Oil Spill - July 4th Weekend
3 replies

BP / Gulf Oil Spill – Radar Comes Through Again
Scroll to top
SkyTruth and/or its third party tools use cookies to monitor traffic in the aggregate on our websites and applications and to improve user experience. If you continue browsing, we'll assume you agree to the use of cookies. You can change your cookie settings at any time in your browser settings. Find out more in our privacy policy.