3-day forecast track for Tropical Depression Bonnie, expected to strengthen over the weekend

The Bad News: Tropical Depression Bonnie is making a beeline through the eastern Gulf of Mexico, heading right for the Macondo well site. According to the National Weather Service, Bonnie should cross over the site on Saturday afternoon, strengthened by her trip over warm Gulf waters to a tropical storm with sustained winds over 40 miles per hour. Crews are being evacuated from the area, and progress on the relief wells has been brought to a halt. 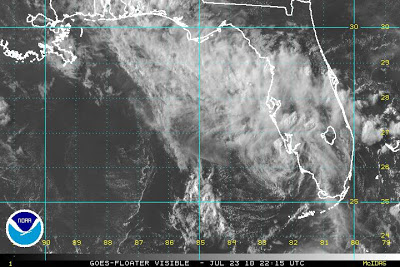 The Good News: The cap on the Macondo well has been shut tight for several days, and we no longer see signs of fresh oil upwelling around the site of the failed well. We have also noticed a significant reduction in the surface oil slicks in the Gulf since early July. Although we don’t know how much oil is lingering out of sight beneath the surface, we hope this means that far less oil is available to be thrown up onto the beaches and into the wetlands when Bonnie comes through.

On June 29, when Tropical Storm Alex was moving past in the southern Gulf, the area of slicks on satellite images spanned 19,000 square miles; the MODIS / Aqua image below, taken on July 21, shows a fragmented area of slicks and sheen covering 5,476 square miles: 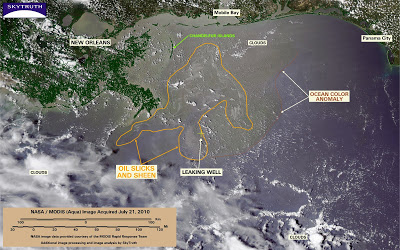 However, the large area of anomalous ocean color noted on a July 19 MODIS image is even more obvious. It shares spectral characteristics with the sediment-laden plume emerging from the Mississippi River, but it may also indicate changed water chemistry in the area affected by the spill – possibly due to oxygen depletion as a result of the elevated levels of methane (natural gas) dissolved in the water. The eastern edge of this anomaly is marked with a dashed brown line.See all of SkyTruth’s images of the BP spill here.
Don’t forget to follow us on Twitter.
And of course, we welcome your support!
https://skytruth.org/wp-content/uploads/2010/07/ts_bonnie_forecast_23jul10.gif 320 400 John Amos /wp-content/uploads/2016/08/test_logo.png John Amos2010-07-23 22:43:002019-02-27 16:13:19BP / Gulf Oil Spill - Here Comes Bonnie

BP / Gulf Spill – Buh Bye, Bonnie
Scroll to top
SkyTruth and/or its third party tools use cookies to monitor traffic in the aggregate on our websites and applications and to improve user experience. If you continue browsing, we'll assume you agree to the use of cookies. You can change your cookie settings at any time in your browser settings. Find out more in our privacy policy.