For some reason we’ve been unable to tweet for more than 24 hours now. We’re entering severe withdrawal, but we can still give you this update (in waaay more than 140 characters):

Today’s MODIS / Aqua satellite image of the Gulf seems to have good illumination conditions for showing oil slicks and sheen east of the Delta. We don’t see much indication of the widespread sheen that was present on the July 28 imagery, although a large part of that oily-looking area is south and slightly west of the Delta and obscured by clouds on today’s image. Stay tuned, this continues to be a very dynamic event. 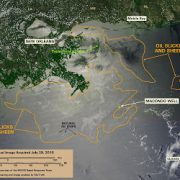 Yesterday’s MODIS and RADARSAT images show something we didn’t expect: slicks and sheen spanning nearly 12,000 square miles. Based on other reports, and the recent trend on satellite images indicating steady dissipation of the surface oil slick, we are optimistically assuming that nearly all of this is very thin sheen.

Speculation: winds from Bonnie obliterated most of the thin sheen throughout the area; but since then, sheen has had time to “reassemble” into observable layers that noticeably affect the sunglint on MODIS images, and the backscatter on radar, but may not look like much to folks out in the Gulf on vessels or in low-flying aircraft. That’s our theory at this point. Chime in if you have other thoughts about what we’re seeing on these images: 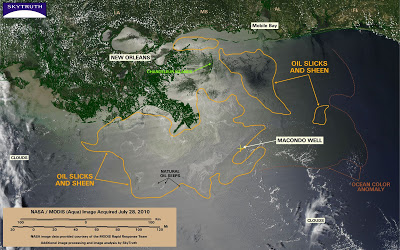 The MODIS / Aqua satellite image above, taken at 2 pm Central time on July 28, shows oil slicks and sheen (encircled with orange line) that we think are likely attributable to the BP / Deepwater Horizon oil spill, spread out across 11,832 square miles (30,644 km2) in the Gulf of Mexico. We’ve marked the eastern edge of a persistent ocean-color anomaly with a dashed line; this anomaly may simply be related to the Mississippi River discharge, or could indicate an area where ocean chemistry has been affected by oil, dispersant, and/or dissolved methane from the spill and cleanup response. Three small slicks attributable to natural oil and gas seeps are also marked. 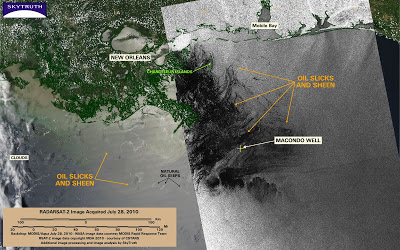 We overlayed the RADARSAT-2 image (black-and-white) taken at 6:48 pm Central time on the MODIS/Aqua image taken earlier that same day. The large dark area on the radar image is probably oil slick and sheen from the BP oil spill: wind conditions throughout the area were ideal for slick and sheen detection on radar satellite imagery, ranging from 2 to 8 meters per second with minimal gusts. Weather satellite images taken at about the same time showed few clouds in the area and very low chance of any rain in the vicinity. 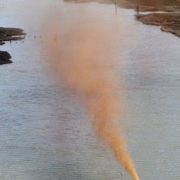 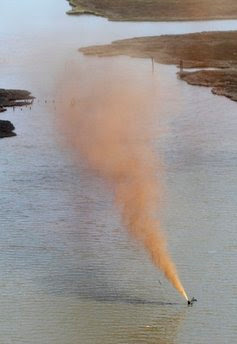 Obviously this well had not been properly plugged with cement to prevent such an occurance. An “orphan” is a well that the operator simply (and illegally) walks away from. In this case they walked away in 2008, and the state declared the well abandoned. This well has been a ticking time bomb ever since.

And by the way, there are 27,000 abandoned wells in the Gulf of Mexico, including 3,500 wells that have been “temporarily” abandoned – some for years – without being permanently plugged.
Maybe it’s time to fix this.

We’re as relieved as anybody to see that the massive months-long oil slick from the BP / Deepwater Horizon blowout is finally breaking up, but it’s way too early to declare victory:

Less oil on the surface does not mean that there isn’t oil beneath the surface, however, or that our beaches and marshes are not still at risk. We are extremely concerned about the short-term and long-term impacts to the gulf ecosystem.

At SkyTruth, we’ll keep looking at the Gulf. If funding allows, we’ll use satellite imagery and other remote-sensing techniques to track the future health of marsh grasses and coastal ecosystems where oil made landfall. 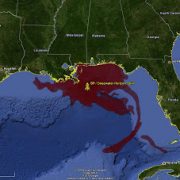 Fingers crossed: it looks like the cap on BP’s Macondo well will hold until the relief well intercepts and permanently plugs it, and no more oil from this blowout will enter the Gulf.

So here’s a map showing the cumulative oil slick footprint for the BP / Deepwater Horizon oil spill, created by overlaying all of the oil slicks and sheen mapped by SkyTruth on satellite images taken between April 25 and July 16, 2010, blogged here, and published in our gallery.

Cumulatively, the surface oil slicks and sheen observed on these satellite images directly impacted 68,000 square miles of ocean – as big as the state of Oklahoma: 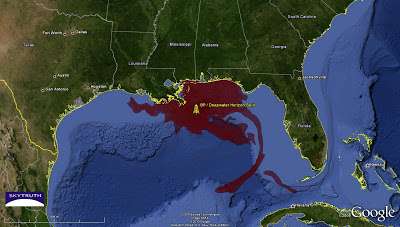