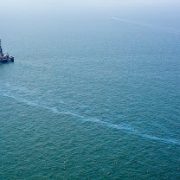 UPDATE 6/8/10 9am – check out video from an aerial overflight of the apparent oil leak next to the Ocean Saratoga semisubmersible drill rig, working ten miles offshore in Mississippi Canyon Block 20. We’re still trying to determine if this is the potential leak that we identified on satellite imagery as possibly coming from Platform 23051, or if this is yet another apparent oil leak in the same vicinity.

NOAA actually mentions the oil leak near the Saratoga in this map published back on April 30. The Mobile Register wrote about this yesterday.

UPDATE 6/8/10 3:30pm – This blogger uses some interesting language, but reports that the Ocean Saratoga is working to plug a well that had been damaged by Hurricane Ivan in 2004. No explanation why there would be oil in the water as a result of this plugging operation. This also doesn’t explain the possible leak we see on multiple satellite images of Platform 23051.

UPDATE 6/9/10 7:15pm – Some media reports are misrepresenting SkyTruth’s work: we never claimed the Ocean Saratoga was leaking oil; our satellite image analysis indicates a possible persistent leak at or near Platform 23051, which is in the same general vicinity in the Gulf. These are two separate structures – one is a mobile drilling unit (MODU), the other is a fixed platform.

Three days ago we blogged about a possible small, but persistent, leak from offshore oil platform #23051 in the Gulf of Mexico, not far from the ongoing Deepwater Horizon spill. We asked for confirmation from anyone who might happen to be in the vicinity. Ask, and ye shall receive: 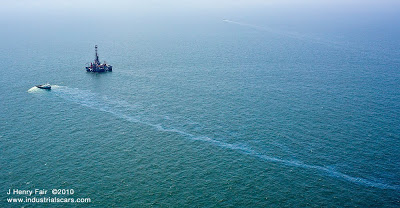 Photograph taken 6/5/10 of apparent oil leak in the vicinity of Platform 23051, courtesy J Henry Fair. Semisubmersible drill rig in foreground; workboat at left where the plume originates at the surface. Note a second plume apparently originating from platform in the background at upper right; this may be Platform 23051 (not yet confirmed).

Professional photographer J Henry Fair flew over the site yesterday using the MMS platform location in our blog post, and took photos of what he found. Here are the two he sent us today. There is an obvious plume of oil in the water next to a semisubmersible drill rig. J Henry identified it as the Ocean Saratoga rig (nice picture here), owned by Diamond Offshore.

The May 17 rig status report available on Diamond Offshore’s website (which prominently features a photograph of Senator Mary Landrieu, with the caption “Credit where credit is due”) shows the Ocean Saratoga is currently under contract to drill for the same company that owns and operates Platform 23051. The platform may be the one visible in the background of the photo above, apparently trailing another oily-looking plume. So it’s possible that we’ve actually discovered two separate leaks or spills in the same vicinity. 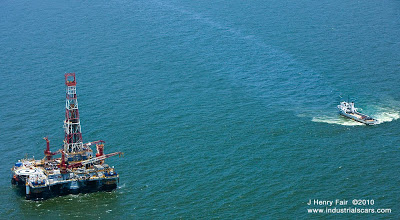 A closer look at the semisubmersible rig, work boat, and apparent plume of oil near the location of Platform 23051 in the Gulf of Mexico, taken June 5, 2010. Photo courtesy J Henry Fair.

J Henry described the workboat at the end of the oil plume as “churning the oil” as if to disperse it more quickly. It’s unclear from these pictures if the workboat is itself the source of this oil plume, or if indeed it’s motoring around where an oil plume is emerging at the ocean surface in an attempt to break it up. In any event, this spill is certainly large enough to require reporting to the Coast Guard.

Other than us – is anybody watching what’s going on out there?

This is why we think America needs publicly transparent, routine satellite monitoring wherever we allow offshore oil and gas drilling.