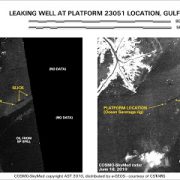 Radar satellite images taken on June 10 and June 18, 2010, show continuing slow leakage from a well at the location of Platform 23051 in the Gulf of Mexico, about 40 miles from the leaking Macondo well that is the source of the ongoing BP / Deepwater Horizon oil spill. Oil from that massive BP spill is visible in the lower right of both images (oil slicks are dark on these images): 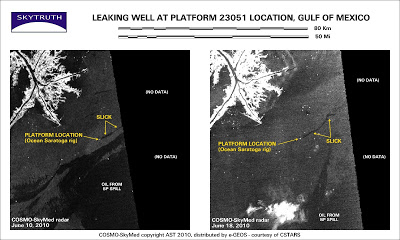 Air photos and video shot at the site on June 5 showed a long plume of oil in the water next to a semisubmersible drill rig, the Ocean Saratoga, and no sign of a fixed platform. News accounts and news releases indicate the Ocean Saratoga is working to plug a well that was damaged by a seafloor mudslide during Hurricane Ivan in 2004, and has been leaking at a slow rate ever since. Containment devices are supposed to be capturing much of that oil.

We infer that Platform 23051, installed in the mid-1980s, was destroyed by – or removed shortly after – Hurricane Ivan in 2004; and that the Ocean Saratoga is working at the site formerly occupied by Platform 23051.

The slick apparent on the June 18 image covers 11.95 km2. Assuming an average thickness of 1 micron (1/1000th of a millimeter), that represents a total volume of 3,157 gallons of oil. Certainly this pales in comparison with the BP spill: that well is now estimated to be gushing oil at a rate of 1.47 – 2.52 million gallons (35,000 – 60,000 barrels) per day; the Coast Guard reports that 1.05 million gallons (25,000 barrels) were captured yesterday. But we think it’s important to know how common chronic leaks like this are.