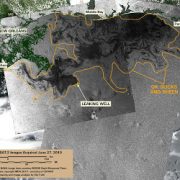 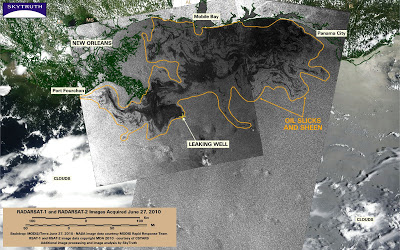 The color backdrop is a MODIS/Terra satellite image taken early afternoon on June 27. Thick clouds from Tropical Storm Alex, passing off to the south, are visible at lower left.

Alex is now causing problems – cleanup operations were suspended today because of the rough weather. Even the radar satellite images are getting messed up by gusty thunderstorms spawned by Alex and sweeping through the area. We may not get any good satellite imagery of the oil spill again until Alex has exited the Gulf later this week.

See all of our satellite images, maps and photos for the ongoing spill in our image gallery.
Follow us on Twitter to get updates whenever we learn anything new.
And please make a donation to SkyTruth to support our work – thanks to all of you who have helped us out recently!