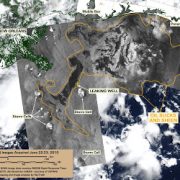 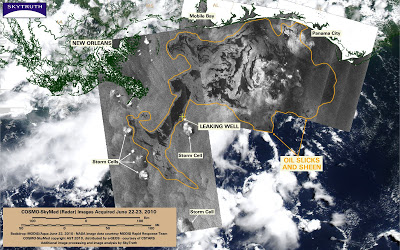 Areas of strong gusty wind appear as large bright patches on these radar images, especially in the east and along the Florida panhandle. Strong isolated thunderstorms, mostly on the June 23 image to the west, create circular “footprints” on the ocean surface caused by strong radial winds. Small bright patches associated with these storms are not clouds, but are high-altitude layers of hail or large water droplets in these storm cells that reflect radar energy.

Weather data buoys in the vicinity (stations 42040 and 42012) recorded wind speeds of 6-8 meters/second (13-18 miles/hr) when these images were acquired, strong enough to break up areas of thin oil sheen and possibly render them undetectable. We infer that the dark areas enclosed within the orange line are thicker patches of oil slick.

BP / Gulf Oil Spill – FSU Research Cruise This Week
Scroll to top
SkyTruth and/or its third party tools use cookies to monitor traffic in the aggregate on our websites and applications and to improve user experience. If you continue browsing, we'll assume you agree to the use of cookies. You can change your cookie settings at any time in your browser settings. Find out more in our privacy policy.