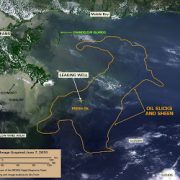 Playing some catch-up from Capital Hill Ocean Week. We served on a panel yesterday and gave a presentation on the spill (starting at 36:10 in this video). Thanks for your patience, we’re stretched pretty thin!

Here are MODIS/Terra satellite images of the Gulf from June 7 and June 9. The image taken June 7 shows slick and sheen across an area of 9,075 square miles (23,504 km 2). A large dark area west of the slick may be a low-wind area within the generally bright belt of sunglint west of the Mississippi Delta. There may be slicks or sheen obscured by this low-wind region: 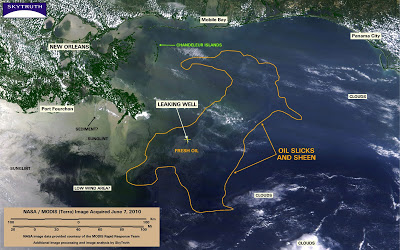 Compare this with the MODIS/Terra taken on June 9, which has a broad sunglint pattern centered on the eastern Gulf that effectively illuminates the main oil slick as well as areas of what we interpret as much thinner sheen. The bright band of sunglint spanning this image reveals fine structure (squiggly bright lines) in areas to the north, south and west of what we interpret as the main area of oil slick; this structure can be caused by natural surfactants, or it may indicate very thin layers of residual sheen related to the ongoing spill. Lots of judgment calls made when encircling the area of slicks and sheen (orange line), but we come up with a total area of 16,434 square miles (42,565 km2): 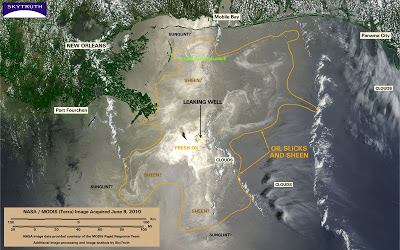 We don’t think the actual area of ocean affected by slicks and sheen nearly doubled in just two days; instead, we think the MODIS image from June 9 was just much more effective at showing those areas than many of the images we’ve been collecting throughout this incident. And it is possible that some of the area we’ve delineated contains natural surfactant rather than spilled oil. Again, a difficult image to interpret in some areas.

BP / Gulf Oil Spill – Memo Shows BP’s Spill Rate Calculations
Scroll to top
SkyTruth and/or its third party tools use cookies to monitor traffic in the aggregate on our websites and applications and to improve user experience. If you continue browsing, we'll assume you agree to the use of cookies. You can change your cookie settings at any time in your browser settings. Find out more in our privacy policy.